We crossed the Pamlico river, traveling a bit less than 2 miles to a small boatyard. Tides there are completely wind driven, and were about as low as they get, so we ended up slipping and sliding a bit over the mud in the entry channel to our destination. I’ll make sure the water level is higher before I leave there. Even a foot more will be enough. The engine controls failed just before we left, giving Greg a chance to see the problem first hand. He replaced the bad cable and we were off with just a small delay. 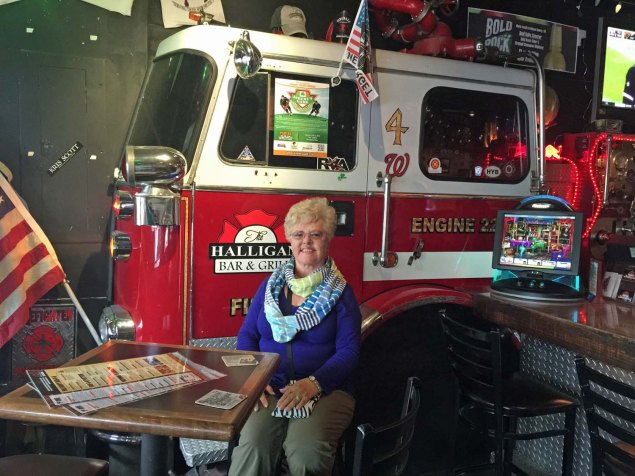 Sue in Halligan Bar and Grill. There was fireman related stuff all over.

The boat was hauled and on inspection no new issues showed up, so the known stuff could be dealt with. When Sue and I returned later in the day to get a few things from the boat for our trip there were five people working away. Hopefully it won’t take many days to get everything done.

I was thinking about staying on and getting in the way, but Sue insisted we leave for our Richmond trip. Richmond VA, the capital of the confederacy, is less than 3 hours from Washington. The Virginia countryside along the way was nice, but Richmond was larger and more interesting than we had imagined. A lot of the homes remind us more of New York City than other places we have been.

We got a room in the downtown Holiday Inn Express for Wednesday thru Friday nights. Parking in downtown Richmond is tight, but the hotel’s free shuttle was underutilized and available whenever we asked. With a nice tip each time it functioned as a cheap and rapid response taxi in the downtown area, and our rental car served if we ranged further, since then it was easier to park.

We spent our first afternoon and evening exploring the old part of down near the historic Main Street Train Station. There were many restaurants right around the station and we hit it good with a small fireman’s restaurant. The bar was made out of half of a big modern fire truck that had been sliced down the middle. I wondered what happened to the other half but the guy there was new and didn’t know. 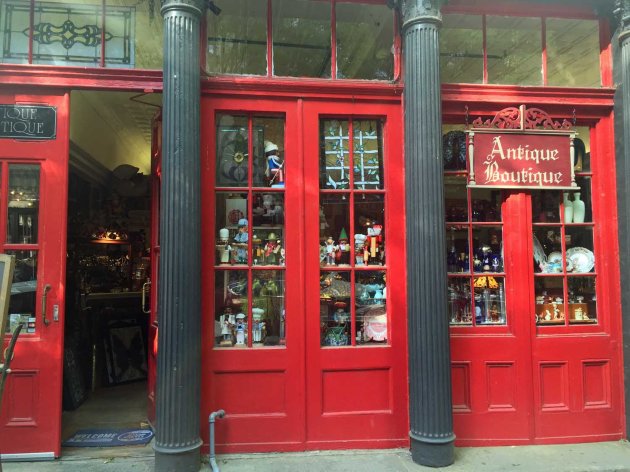 Sue says she had a huge collection of everything. Best we’ve seen. Loaded with stuff.

We walked back to our hotel on Cary street. We’d heard about Carytown, but that was some miles at the other end of the street. This end was the Shockoe historic district. Many interesting restaurants and shops. The Antique Boutique had to have more things, none of them junk, than we had ever seen in such a place. Sue bought an old cup and saucer. Don’t ask where she’ll put it.

We saw enough this first day that we knew we needed a longer stay, so we extended our stay through Sunday night. That wasn’t easy because of a big NASCAR race in town, but a cancelation got us in the next day. At the train station also picked up a brochure for the annual Richmond Garden Club tour. It was for the next day! We just missed that in Charleston. Not this time.