Since our boat is federally registered, it has no license numbers on the bow, and just its name, Star Gazer, on the stern. That, along with its Portland Maine “hailing port”  is its unique name in the Coast Guard registry. We have never been to Maine and don’t plan to go, with or without our boat. The inland city of Austin, Texas, where we do have a home, seemed inappropriate so we picked Portland out of the air. Star Gazer really has no home port. It can be anywhere on the loop, the only requirement is that it be to the north in the summer and to the south in the winter.

We started boat shopping in late 2013. We went to a broker boat show in St Petersburg, FL in December where some of the used power boats for sale are seen from the sun deck roof of our boat in the picture below.  and Sue fell in love with our boat. Since it was fairly old its price was about a tenth of a new one. I did not like the 4’8″ draft since the maximum recommended draft for the loop is 5′, but the stand up engine room reached through a door instead of by pulling up hatches in the salon floor makes up for it. We’ll just have to be careful and watch our depth. Sue especially liked the kitchen toward the back of the salon on the same level – it’s called “galley up”. She can see out the large salon windows while working there. 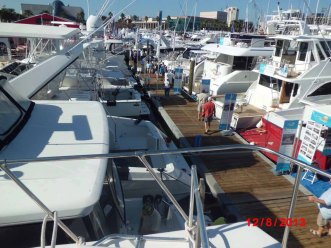 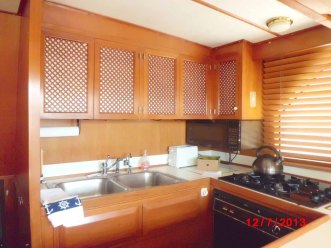 Star Gazer is a DeFever, which is a trawler boat type. Most trawlers have length in the 40 or 50 foot range. Eight knots is a common cruising speed for one. They have displacement instead of planing hulls, so they can travel efficiently (for a boat) at their cruising speed. Trawlers have a fairly wide beam for their length. Our 47 is 16 feet wide. This allows a walkway outside of the cabin all around the boat, which is handy when we are going through locks and need to get from one end to the other to tie up. There are 145 locks the way we plan to travel the great loop.

Cabin space is generous on a trawler. To board our boat you normally would step from a floating dock to our swim platform in the back. Go up 5 steps (we have no ladders – important as we get older) to the back sundeck. From here you can go forward and 5 more steps up to the fly bridge, or through a door and 4 steps down the salon beneath it. From the salon you could go back and 5 steps down to the area under the sundeck which has our master bedroom, a guest bedroom which we use as an office and two bathrooms which share a tub/shower. The closet in the office holds a washer and dryer. Forward from the salon and 5 steps down is a small hallway leading forward to the front bedroom and bathroom. Back from this hallway is a door to the engine room which is under the salon. Click  here to see the fly bridge

While our boat’s top speed is about 16 knots, that uses barrels of fuel and we never go that fast. We sometimes go 10 knots, where we use about a gallon per hour, or about a mile per gallon. At that speed we create a pretty fierce wake: the bow is up and the stern is down and we are essentially pushing uphill. Dropping to 6 ½ knots allows us to glide along with no wake at all. The maximum amount of energy from the engines is put into forward motion. So going slower saves a boat load of fuel. There’s nothing like effortlessly gliding along at 6 knots early in the morning on a glassy smooth waterway.

Sometimes it’s like a crime to pump it up to 10 knots and thrash through the water, but other times it’s great. We call 10 knots “porpoise speed” because they love to come and surf ahead of our wake. As many as 4 can be on one side. I wonder if it affects our mileage to be dragging these guys along with us. Click here and here to see them.