Every once in awhile we have a happy accident. We have the other kind too but I’m not talking about that here. We left our mooring ball at Vero Beach at 8 and had an easy trip to Cocoa Village Marina at mile marker 899. On the way we passed another trawler who asked if we knew a good place to dock to see the rocket launch. What launch? He told us a rocket was scheduled to go up today! I new our destination was just across from Canaveral Air Force Base so I gave him their phone number.

I checked the internet and it was an air force Delta IV rocket carrying a new GPS satellite. Well, I’m all for that. Anything that will tell me more accurately if I’m in the center of the channel is worth my taxpayer dollars. The launch window gave us plenty of time to get there. We were backed to a dock at the marina edge that looked straight across to the launch site. All we had to do was set up the folding chairs.

That was completely unexpected. The last time we hit it lucky like that was the Geminid meteor shower we blundered into when we started a boat trip in Myanmar a number of hours before dawn.

We had nice weather coming up to Cocoa Village and a very pleasant trip. Yesterday on the way to Vero beach it was colder and overcast. Once we are underway after an early start Sue likes to nap on the bridge, and bundled up a bit to do it then. 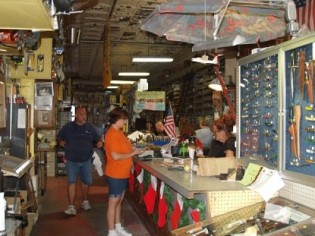 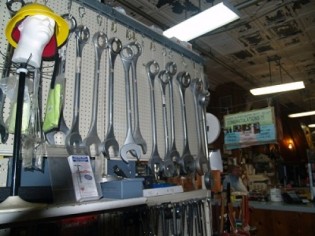 The old downtown in Cocoa Village has gone touristy with gift shops, antique shops and restaurants. One store that resisted that was Travis Hardware. You can go upstairs for sissy stuff like home and garden, but downstairs is for nuts, bolts and tools. I saw wrenches you could use to bolt the main engines down on an ocean liner. Some of their open ended wrenches are 4 feet long! What kind of man uses a wrench like that? They should do a beer commercial about him.

One thought on “We Hit it Right”